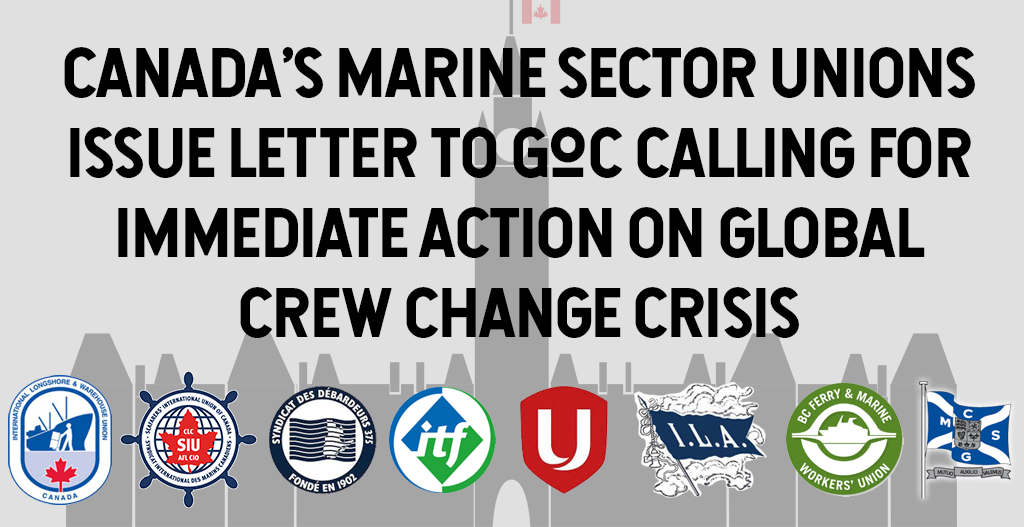 RE: Immediate Action is Necessary to Address Crew Change Crisis

On this “International Day of the Seafarer” June 25, 2020, we write to you to express our deep concern with the ongoing global crew crisis in the maritime industry. The necessity for governments to engage in meaningful action to address the stranded crew crisis for seafarers who are working well beyond their contractual obligations is now past due.

The theme set by the International Maritime Organization (IMO) for this year’s International Day of the Seafarer is “Seafarers are Key Workers” and as such we must recognize the incredibly difficult position thousands are now in, either unsure of when they may return home or if they will be able to at all. Seafarers have sacrificed their lives to support global supply chains here in Canada and abroad during the Pandemic and it is time to treat seafarers with the respect and dignity they deserve and put in place a plan to support those who want to go home.

A June 15, 2020 deadline was established by the International Transport Workers’ Federation (ITF) to resolve the crew-repatriation issue. That deadline has come and gone, and the majority of the worlds’ seafarers remain stranded on their vessels, with as many as 400,000 international seafarers now working in excess of 14 months at sea. Further extensions to these workers’ time-at-sea can no longer be tolerated, it is time to allow seafarers to return home to rest and be with their families and loved ones. Prior to and now throughout the ongoing Pandemic they have done their duty and now they deserve our support.

From this point forward, ITF inspectors around the globe will be instructed to assist seafarers with repatriation. A campaign, “Enough is enough” is underway and the ITF representing over 18.5 million transportation workers through its global affiliates and the worldwide ITF inspectorate, will enforce the rights of all seafarers to stop work and return home from this point forward.

We commend the Government of Canada and Transport Canada and recognize the important work that took place towards enacting policy to facilitate crew changes and visas for foreign seafarers in Canadian ports. This is a significant step to permit crew changes to take place and a step beyond what many seafaring nations were willing to do. Many Transport Canada officials are going above and beyond their normal duties and we thank them.

Now, Transport Canada must authorize and empower Port State Control officers to detain vessels and shipowners who are clearly flouting their obligations under the Maritime Labour Convention in order to ensure the safety and health of seafarers on board their vessels. Flag states must not be permitted to extend contracts for seafarers who are fatigued and in desperate need of rest and who want to depart from their vessel.

Vessels from flag states such as Panama, who have recently extended crew contracts to now exceed 17 months, must be arrested and detained in Canadian ports until a time that crews may freely exercise their right to return home as they so choose. Many international seafarers are afraid to speak up for fear of retribution or blacklisting from their Companies. Canada has an international obligation to protect human rights and we must not turn a blind eye to these atrocities when they are occurring in our own waters and within our borders.

Seafarers are being denied disembarkation in Canadian ports by their employer despite the fact that Canada can permit them safe passage home through its airports. Seafarers are being deprived of their rights to leave the vessel now that their contractual employment term has expired. These are obvious violations of the Maritime Labour Convention but most significantly, they are situations that wade dangerously close to indentured servitude and forced labour. We believe this line has already been crossed and it is now crucial to take action to prevent further harm.

The ITF, affiliated unions and our social partners have actively engaged with and received public support from the UN General Secretary and other UN agencies including the International Labour Organization (ILO) and International Maritime Organization (IMO). The ILO has confirmed that force majeure can no longer be used as a blanket excuse for seafarers’ contract extensions. Now is the time for the Governments to take a stand to assist desperate, fatigued and stressed crew members who wish to be repatriated.

If Companies and other flag states refuse to comply, seafarers are well within their rights to stop work. If they are refused disembarkation, then they may choose to remain on the vessel as passengers and in doing so, may force the hand of Port State Control to detain the vessel until it is appropriately manned for sailing. All options are on the table and so we must work together in this dire situation to come to a solution to demonstrate to these seafarers that they have not been forgotten, that someone will assist them when they call for it and that their lives have value.

Seafarers have, throughout the Pandemic, delivered essential goods to Canadian ports and abroad and have professionally and responsibly carried out their duties to keep the world’s global supply chain moving. Exhausted crews must be relieved immediately to avoid what will inevitably lead to a major accident or marine incident, and irreparable harm to many seafarers’ physical and mental health.

No further extension to seafarers’ contracts is acceptable and we request an immediate update from Transport Canada with information as to how this crisis will be addressed and what plan will be put in place to ensure Port State Control officers are given the resources and support necessary to act in these cases as they become more and more frequent.

As the leaders of Canada’s largest marine sector unions, we strongly urge the Government of Canada to take immediate steps to ensure seafarers calling at our ports and in our communities are provided with the assistance that they so desperately need and the respect that they have undoubtedly proven they deserve.

We appreciate that the COVID-19 Pandemic has created a difficult situation for all, and we want to work together to find a solution to this crisis. We look forward to your response.